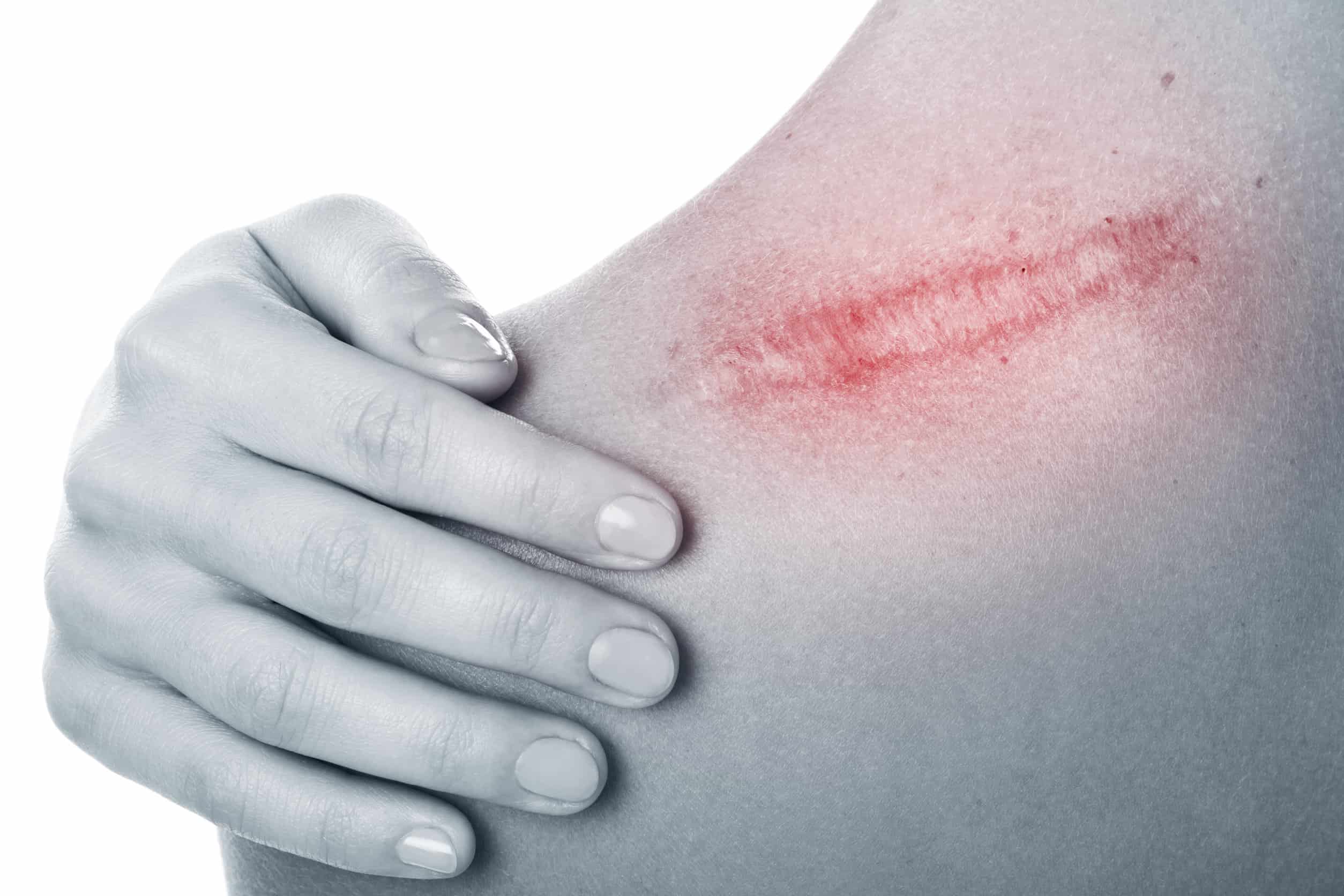 Advances That May Eliminate Scarring

You are here: Home / Archive / Feature Stories / Advances That May Eliminate Scarring

Scars are a public health as well as aesthetic threat, as internal scars can compromise the function of organs and tissues. Scientists are now devising medications that promote healing without producing scars. One of the scientists on the front lines of scar treatment and research, Dr. Michael Longaker, discusses how these medicines work and their possible uses.

Longaker, Professor of Surgery and Director of the Institute of Stem Cell Biology and Regenerative Medicine at Stanford University, has conducted research that has resulted in a medication that heals wounds in mice without scarring, and without compromising the skin’s strength.

It’s a significant breakthrough because although scars look tougher than healthy skin, they’re actually weaker, not to mention unsightly. People with disfiguring scars, especially facial ones, are often ostracized by society. That’s certainly emotionally painful, but Longaker says scars actually pose a public health threat. He’s talking about a different kind of scarring, though not the kind that are only skin deep.

“Scarring is not just skin deep,” says Longaker. “There are many other forms of fibrosis or scarring that are internal. About 45%, almost half of Americans when it was estimated almost 20 years ago, die of a disease that ultimately tracks to fibrosis. So scarring is an example of an acute fibrosis. But there are many examples of chronic fibrosis.”

These examples include scleroderma, pulmonary fibrosis, liver cirrhosis, and adhesions.

“Or after a heart attack, there’s a scar on the heart. And if it’s large enough, you have pump failures, inflammation, and the pelvis gives you adhesions and infertility. So it’s a huge problem, but it doesn’t get the attention of cardiac disease or cancer,” explains Longaker.

21-52 Advances That May Eliminate Scarring

[00:00:08] Dr. Michael Longaker: We truly regenerate the wound with no scar at all. Seeking an end to scars, inside and out. When Radio Health Journal returns...

[00:00:23] Nancy Benson: If you live long enough, you're sure to acquire a collection of scars on your body. Sometimes these fibrous patches of skin take on a mystique that become part of our personality. Think of the famous chin scar that gives actor Harrison Ford has rakish charm or the notorious Z shaped forehead scar of fictional wizard, Harry Potter. But many scars are unwanted, even though we wouldn't have survived through evolution without them.

[00:00:50] Dr. Michael Longaker: Scars are a late evolutionary, adaptive trait. Humans are a hundred thousand years old, mice in contrast are a hundred million years old. So if you healed really slowly when you were a neanderthal, a hundred thousand years ago, you could develop an infection. There's no antibiotics. You could continually bleed and be debilitated, and you'd be eaten by a predator. So, if you could heal quickly with a spot weld, so to speak, that may not look like the skin around it. Scars do not do that. They may not function like the area around it, scars don't do that, but you could survive and procreate the species. That was the evolutionary pressure. So we evolved for speed and repair, and we compromised form and function.

[00:01:35] Nancy Benson: That's Dr. Michael Longaker, Professor of Surgery and Director of the institute of Stem Cell Biology and Regenerative Medicine at Stanford University. Years ago as a postgraduate research fellow, he worked under Dr. Michael Harrison of the University of California, San Francisco — the first surgeon to successfully operate on a fetus in the womb.

[00:01:57] Dr. Michael Longaker: He asked me how embryos heal wounds. Because the child, unborn patient, the fetus would be operated on and maybe there's a patch, like a Gore-Tex patch, sewn on to replace something. And there was very little red around it 16, 18, 15 weeks later. And of course, you and I developed redness around a band-aid maybe in an hour. So I took that question and I began to work on different species — sheep and mice and monkeys and other things. And it turns out that you and I, and every animal on earth, heals without a scar early in gestation — when our skin is kind of gelatinous. And then when it becomes a barrier function — we're tight skinned animals, we're not like shar peis — you began to scar.

[00:02:42] Nancy Benson: Longaker became obsessed with the process of scarring, also known as fibrosis. He observed that while fetuses heal with little scarring, the elderly do too. That's because old skin loses its tightness. Its barrier function has deteriorated. In this way, old skin is similar to embryo skin, which also doesn't have a barrier function.

[00:03:05] Dr. Michael Longaker: Think of a bowl of jello. If I make an incision in a bowl of jello, it doesn't gape open. Cause there's no residual strain or tension on it. But if we make an incision in a 14 year old girl or boy shoulder, it gapes open. So now I have to close that, and if I excise tissue, there's even a bigger amount of tissue missing. So the forces that it takes to close that wound is stronger than the forces trying to pull it apart, until it's at equilibrium about 10 to 12 weeks later. So humans have problems of over-healing in the form of hypertrophic scarring. And the rare keloid. So I thought, well, mechanical forces must play a role, and that led to disrupting them with a drug.

[00:03:49] Nancy Benson: Longaker's research has resulted in a medication that heals wounds in mice without scarring and, without compromising the skin's strength. It's a significant breakthrough because although scars look tougher than healthy skin, they're actually weaker, not to mention unsightly.

[00:04:06] Dr. Michael Longaker: The color or the texture or the bare area. There are no hair follicles or sebaceous glands or sweat glands in a scar. So there's no secondary elements, hair and glands, number one. Number two, the, uh, area between the cells, the extracellular matrix, collagen, etc. is organized as kind of — very differently than the nice basket weave nature of. And number three, despite all that collagen, it's only 80% as strong as normal skin, at about 8 to 10 weeks after your wound is healed.

[00:04:45] Nancy Benson: Longaker says he's now used the drug on pig skin, which is the most human like animal skin, and the results have been promising. The next step is clinical trials in humans. If they're successful, Longaker says the benefits will be far reaching.

[00:05:00] Dr. Michael Longaker: For me, personally, I would like to have cleft lip and palette because the entire burden of that child is as a consequence of scarring. Their whole life for growth and form. So for me, that's important. But the big picture here, there are about a hundred million new scars a year.

[00:05:20] Dr. Michael Longaker: In the U.S. — about 80 million operations. And it's hard to know with burns and lacerations and trauma, probably another 10 to 20 million. So this is a huge amount of new scars every year in the U.S., and people always ask me, Dr. Longaker, are scars important? I say only if you have one and especially if it's on your face. So my lens would be things like cleft lip and palate closure, burns, and other things. But remember they're 80 million operations. They all heal with a scar.

[00:05:51] Nancy Benson: People with disfiguring scars, especially facial ones, are often ostracized by society. That's certainly emotionally painful, but Longaker says scars actually pose a public health threat. He's talking about a different kind of scarring, though not the kind that are only skin deep.

[00:06:08] Dr. Michael Longaker: Scarring is not just skin deep. There are many other forms of fibrosis or scarring that are internal. About 45%, almost half of Americans when it was estimated almost 20 years ago, die of a disease that ultimately tracks to fibrosis. So scarring is an example of an acute fibrosis. But there are many examples of chronic fibrosis. For example, scleroderma, pulmonary fibrosis, liver cirrhosis, adhesions, right? After you have a stroke, your brain doesn't regenerate. There's a scar there. Or after a heart attack, there's a scar on the heart. And if it's large enough, you have pump failures, inflammation, and the pelvis gives you adhesions and infertility. So it's a huge problem, but it doesn't get the attention of cardiac disease or cancer.

[00:06:58] Nancy Benson: Longaker says the development of interventions for internal scarring may not be too far off. In the meantime, millions of external scars could be avoided in the future. Even scars you've already got, could be erased.

[00:07:11] Dr. Michael Longaker: This person lives a long time. Some people have many scars. So this would not only be an injection of Verteporfin when the surgeon is closing the incision at the end of the operation, but now you can say, oh, what about all those other scars that have existed for a long time? So one could imagine lidocaine cream being put on the scar, or injection of lidocaine, come back in about 20 minutes and the surgeon excises the scar under local anesthesia in the office, and then injects Verteporfin and the closure, and then it's closed. So there's many, many, many millions of existing scars that could be revised.

[00:07:54] Nancy Benson: Harrison Ford without a scar? Maybe not. For many of us, scars are a badge of courage that we probably display, but for others, scars are a painful disfigurement that bring much grief and pain. Burns scars are one example.

[00:08:09] Dr. Michael Longaker: You die from a burn or you live with pain and disfigurement. It's a horrible outcome, depending on how big it is. It would be great. If you could minimize that scarring for those patients, and dramatically change their life.

[00:08:22] Nancy Benson: You can learn more about Dr. Michael Longaker's research and about all of our guests by visiting our website at radiohealthjournal.org. Our writer producer this week is Polly Hansen. Our production manager is Jason Dickey. I'm Nancy Benson.

Enter your name and email address below and I'll send you periodic updates about the podcast.

How Has Covid-19 Shaped the Public Response to Monkeypox?

Telemedicine Finally Gets Its Chance

Fighting Off Stress at College

Since 1992, Radio Health Journal has been bringing listeners useful, verifiable information they can trust and rely on in the fields of medicine, science & technology, research, and the intersection of health & public policy. Both Radio Health Journal and sister show Viewpoints Radio are AURN productions.

How ‘Long Covid’ Has Brought Attention to a Neglected Illness

Dissecting the Emergency Room: Every Patient Has a Story

The Language of Addiction: Why words matter

Enter your email address to get notifications & instant access to new Radio Health Journal segments as they are released.